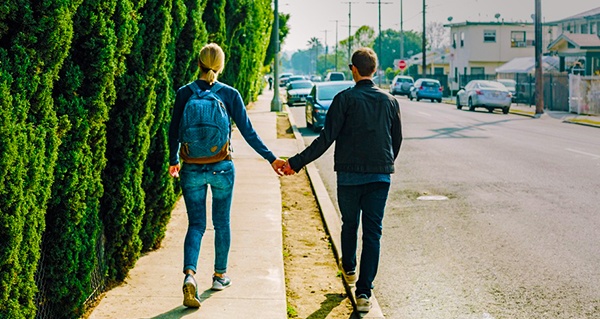 A CRM for your dating life? WhoNow is working on changing the way you manage all your flames, current and former. Oh, and they may just be ushering in a whole new era of an utterly transparent, glass house dwelling social web.

Tinder. Match.com. Grindr. Bumble. Hinge. I could go on. Have you been on any of these dating / hookup apps? There are definitely more that I'm either intentionally leaving out or forgetting. I actually have been on the first two "dating" apps I mentioned. To date myself (sorry), I was on Match before they even had a mobile app. I would have qualified for power user status on Tinder during it's explosive growth period at the beginning of 2014. I was on my way to marriage before I had even heard of Bumble. (My niece says it's solid though.)

WhoNow, available on iTunes and Google Play, might sound like a response you'd get from a parent when you give them a verbal update on the newest flame in your love life. But it might quickly become a company-name-turned-verb in pop culture amongst groups of friends who are no stranger to mate-evaluation via mobile device. In fact, you may not even end up categorizing it as a "dating app", depending on the evolution of the "Yelp for People" movement.

To call WhoNow a "dating app" is inaccurate. I'm of the opinion that their positioning statement, "The app for your dating life" says it all, but is too vague.

"Chronicle your dating life with feedback from close friends" is longer but more to the point with the central-use case.

When you first start to use the app, you'll upload photos of a person you're dating, followed by the option to select pre-populated positive attributes from a honeycomb-patterned, finger-friendly listing. Here's a screenshot of my fiance' in my WhoNow. 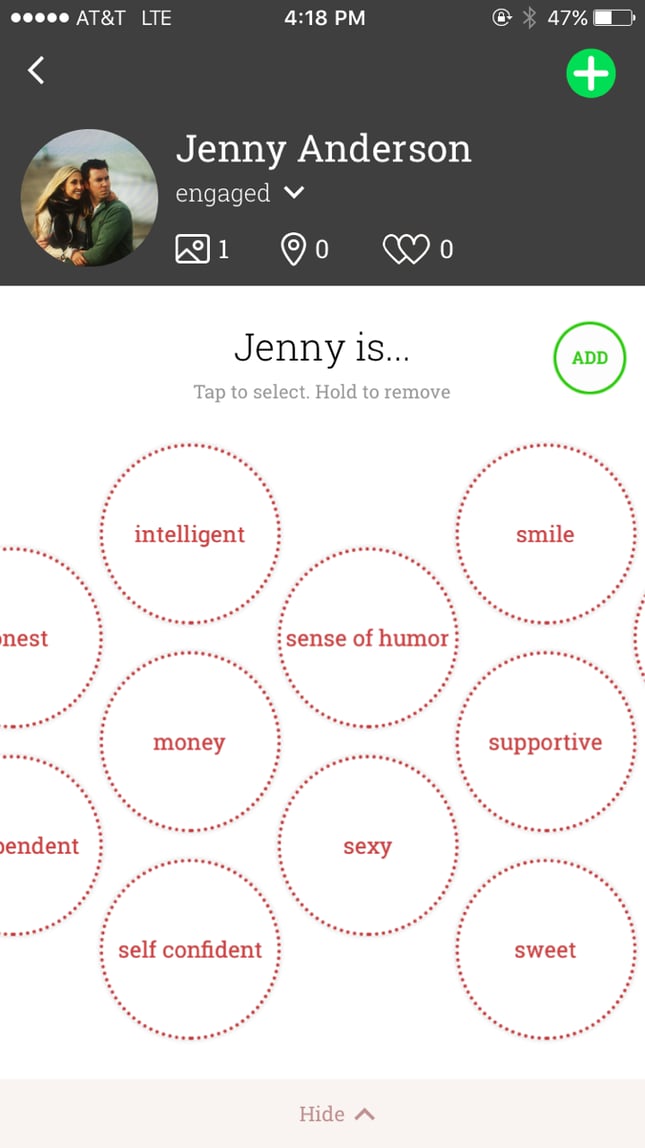 Obviously, my fiance' has every single positive attribute available. ;-).  On each contact, you can add multiple photos, denote someone as "a keeper" and also set a relationship status, not unlike an opportunity status you might set on a sales prospect in your CRM.

Once you get a photo into the system, the new contact goes into what amounts to a private news feed for your dating prospects: 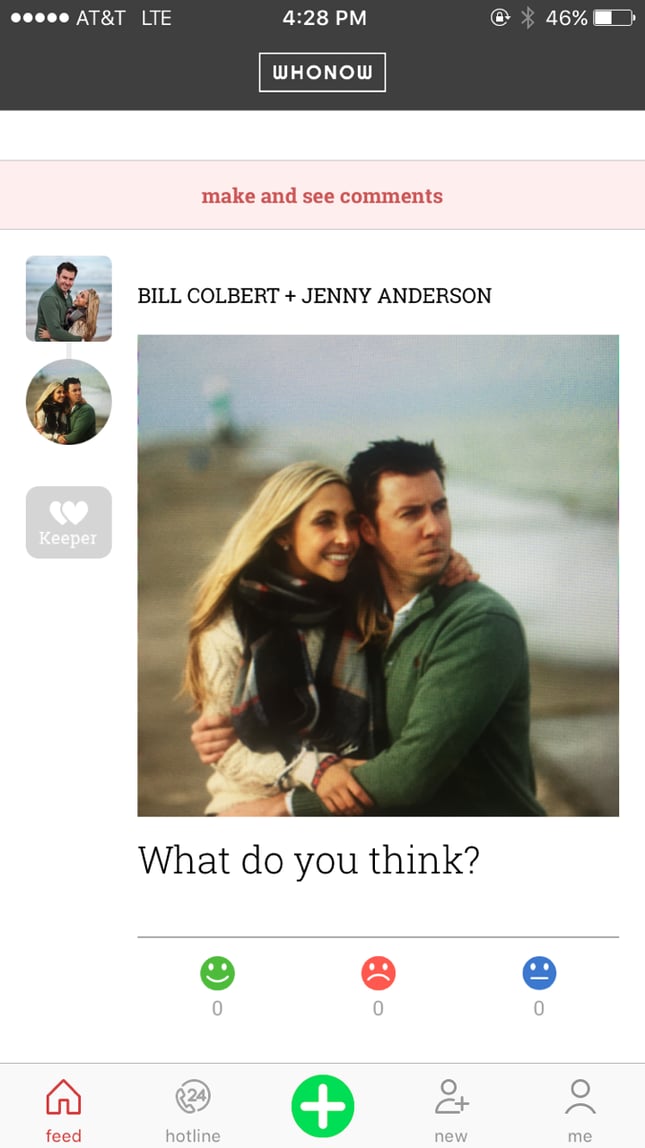 The friends you invite to connect with can rate the photo with a smile face, frown face, or the "Blue Face". The Blue Face represents either complete indifference or acute asphyxiation, the derivation of which may be attributed to anything from unbridled raging jealousy (no...c'mon!) to the surprise learning of the reviewer that they've gained an eskimo sister. It's a little hard to figure out who you're connected with on the app, but hopefully WhoNow will address this in an upcoming release. Despite the ambiguity, it feels relatively private and secure. I didn't feel worried that my black book had suddenly opened for the masses.

Just when you think you're done with Johnny for good, WhoNow pulls you back in - for the exit review. After you mark a contact as "It's over" in the WhoNow relationship status drop down, you get to change your review of their attributes.

Did Johnny let himself go after the 4-month mark and put on a bunch of weight over the holidays? You can dock him for his "body" or lack thereof. Maybe Johnny got caught in a lie! You can knock his honesty, too. To put any rumors to rest, you also can make sure everyone knows who actually ended things and, "Would you recommend them to a friend?"

How would that go, exactly??

"Hey Ali, Johnny is pretty dishonest and he stopped exercising / trying 4 months into our 'thing', but I think you should totally go out with a dishonest guy with a burgeoning dad-bod who stops trying way too soon into the relationship! He's perfect for YOU!"

Need to ask an "expert", or an unbiased stranger? WhoNow has you covered.

Another fun and completely separate feature of WhoNow is the anonymous advice "hotline" section. Pose a question, then get feedback from other users. Have you ever been in a tough spot and needed the advice of a stranger who was completely unbiased? WhoNow definitely delivers.

The icons on each question vary, it is not explained what they mean, but it's totally easy to understand from plain sight. This is a great indication of their potential for growth. After all, your users gotta be able to figure out how to use the thing! They kept it simple, for stupid.

What's great about WhoNow's two-pronged approach to the early feature set is a single user can derive value from the platform even if their friends don't immediately get on to comment. Shout out to the WhoNow product team - smart move! When I couldn't figure out how to add friends, I just got lost in other peoples' anxiety-ridden questions on the hotline. Sounds like a growth hack we'll be reading about in a case study on GrowthHackers.com in 3 years.

Ok. So I think I get it. Can you give me the definitive conclusion on how would you describe WhoNow?

WhoNow doesn't connect you with people to date. There's no actual meeting of new people based on interest, geography, or mutual connections. WhoNow's value is as an entirely-complimentary, closed-circuit journal for the "Dating 1.0" apps you already use. WhoNow is like your little black book, turned into a picture book, combined with crowdsourced feedback from your closest friends who you would normally look to for feedback on the same subject matter via a group text. Any dialogue on a particular love interest is just a lot easier to follow on WhoNow. And c'mon. There's a F-king exit interview! You know it's gotta be good.

So, it sort of sounds like WhoNow is Yelp for People.

WhoNow is moving into a not-without-controversy area of the web 2.0 era; the personal, maybe too personal, character review of who you are as a person for all the world to see. Yelp.com and the widely-ubiquitous 5-star online review have ushered in a new era in transparency for business. As a business owner, if someone has a bad experience at your establishment, heck, maybe even just a bad day, you could be subject to a very public flogging that could haunt your business for years, maybe centuries.

A "Yelp For People" app has received significant backlash in recent months. Sadly, much like the U.S. government's fixation with getting the keys to the back door of the iPhone, you start to wonder if a star rating for one's own personal character is one of those inevitable "advancements" in tech that will have a profound impact on society. It's just a question of whether or not the mainstream is ready for it.

WhoNow is in a really interesting position. While the aforementioned "Yelp for people" app, Peeple, is taking big egg on the face, WhoNow is flanking Peeple's position with what may be the single best use case of personal character reviews; dating advice and feedback on love interests that gets shared amongst friends. Does WhoNow eventually evolve into a multifaceted personal character review platform? If you want to get to that point as a company eventually, it makes a lot of sense to start in extremely fertile soil;  the semi-private conversations already being had by close groups of friends via text message.

Why WhoNow is a Great Acquisition Target for The Match Group

The Match Group's portfolio of brands contains many dating sites you've probably heard of, and many, many more niche brands you probably have not. I've heard of BlackPeopleMeet.com, but never knew there was BlackBabyBoomerMeet.com? Does Chris Rock do their commercials?

From an investor's perspective, every one of the brands in The Match Group's portfolio has a glaring limitation to great, long-term customer lifetime value. The problem? Each platform devotes all their time and money towards losing their customers. The better they get at their core competency, the more certain it becomes that the customer will leave. If you're single, you go on Tinder for as long as you're "casually dating", or until you end up in a long term relationship.

Now, there's always a steady flow of new users, and people of course come back after periods of no usage, but the LTV for the vast majority of users on the site has an expiration date. Wouldn't it be great to find a way to extend the lifetime value of their customers into the time when they move past the need for Match, HowAboutWe and Tinder?

WhoNow could fill that need well. Just because you move into a new stage in your personal life doesn't mean you won't influence the dating habits of your friends.  WhoNow would give The Match Group great insight into how friends' sentiment starts or stalls usage of their other portfolio dating platforms. Is Suzie in a truly heinous, doomed-to-fail-since-that-embarassing-fight-over-him-choosing-to-single-Yellow-Leadbetter-at-karaoke, relationship with an asshole guy who will end up hurting her? If enough of Suzie's friends weigh in on a particular photo posted on Suzie's profile, maybe Suzie dumps the bad boyfriend and resubscribes to Match.com for another $218/year. If I'm the Match Group, I want to migrate all that peer influence data out of iMessage and into WhoNow.

There's no doubt WhoNow has a very easy-to-understand app that serves as a micro-social-network for a very personal topic. The question remains though whether personal reviews of a person's character will grow into the norm, or continue to receive negative feedback that send them the way of Google Glass; back to the drawing board to wait for society to accept its inevitable mass adoption.