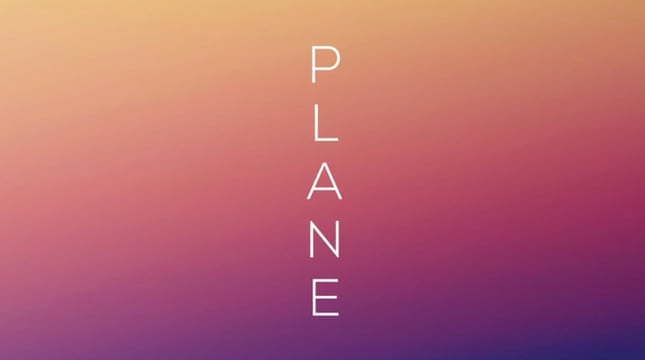 For some reason, I used to hear that from co-workers.

You're probably familiar with difference between an introvert and an extrovert. If you've taken the JUNG typology test, you might also understand that one person can be degrees of both. I personally skew towards introverted; I have no problem with and generally enjoy long periods of time alone. Solitude provides my specific personality type a nice break to recharge and refresh. Heavy social interaction can, in some instances, feel exhausting for me. For those that skew more on the extrovert side of the spectrum, its completely exhilarating. Time alone is unenergizing, anxiety inducing, or boring.

I'd recommend to anyone reading this that, if you've not yet done so, invest some time in figuring out where you sit on the spectrum. Once you know you can optimize your life for your specific needs. Know thyself, fool! Life is too short to not be personalized.

Having a thorough understanding of my unique personality type impacts how I see the value of networking, and in how I understand the importance of relationships. Unlike the other author on this blog, I'm not a natural connector. I probably won't earn the nickname "Mayor of Manhattan Beach." Making a ton of new connections through striking up in-person conversion may never be my best skill. But it's why I'm finding a lot of value in a new app called Plane.

At this point in this post I should clarify that yes, that headline sounds like I've never heard of chat rooms, which have been around since the dawn of the consumer internet. If I really just wanted to talk to people, I could probably still cruise chat rooms. But Plane isn't a chat room. And Plane isn't Twitter, where short back-and-forths between random strangers can be seen by everyone.

Plane bills itself as a "social icebreaker" app. That's completely accurate. Not long after I downloaded it did I find myself starting up conversations with people from around the globe. From Paris to San Fransisco, I was engaged in light chatter with people I might never meet. And you know what? It was fun. There was no anxiety. There was no expectation. It felt good. Believe it or not, it was actually pretty fun to have a weather convo with someone in Paris. This is coming from someone who generally only feels intense, nails-on-a-chalkboard sounds in their mind when in a weather chat ice breaker phase of a call or meeting. Maybe I just have a big chip on my shoulder because I live in Chicago and it's March 6th right now? Chicagoans are all a little on edge re: the weather this time of year.

If you asked anyone if they needed to have more conversations about the weather, I'm not sure how many would say yes. But this was interesting. It was fun. There was no agenda. It's not like on LinkedIn when you get the connection request then it's immediately followed by a sales pitch (yet). It was low commitment and low risk.

Web 2.0 is maturing. Social media is so widely accepted. A critical mass of people have had 5-7 years to develop habitual usage. So while there have been Plane competitors in the past who have fallen short, it just goes to show the importance of timing. SxSW is this week, which reminds me of one app in particular that I'd call a competitor of Plane.

Plane is not like Highlight was 4 years ago. It's a minor pivot, but a major one.

Remember when Highlight came out? It's been 4 years since it was released . At the time, it was making use of very, very new technology - geolocation from your mobile device. Connecting with people near you based solely on geography felt just plain creepy. I had no interest in striking up conversations with people "near" me. Just because they were near me didn't mean I'd have anything in common with them. I'm not writing this to dump on them (Although looking at the logo does make my head hurt). But it just goes to show the importance of timing. Tech capability does not always equate to market readiness. I haven't met a single person in 4 years who had an interesting story about the connection they just made through Highlight.

Plane isn't an exact replica of Highlight. What they got right is, they didn't make precise location the focal point. Location is part of it, but right now you can segment comments to a particular city. Plane doesn't change priority to connect you with people closest to you. Plane puts the priority on content and subject matter. Sure, you can just say anything you want. You can say, "hey, what's up", and that's it. But having the app in the first place qualifies the user as having intent to connect. It's far better to bait the connection based on content vs. location. Don't want to talk to anyone anywhere in the world? No problem. Segment down to a few cities you care about, or the city you're in. Maybe most importantly, the tweet-like question or content you post only lasts 24 hours. 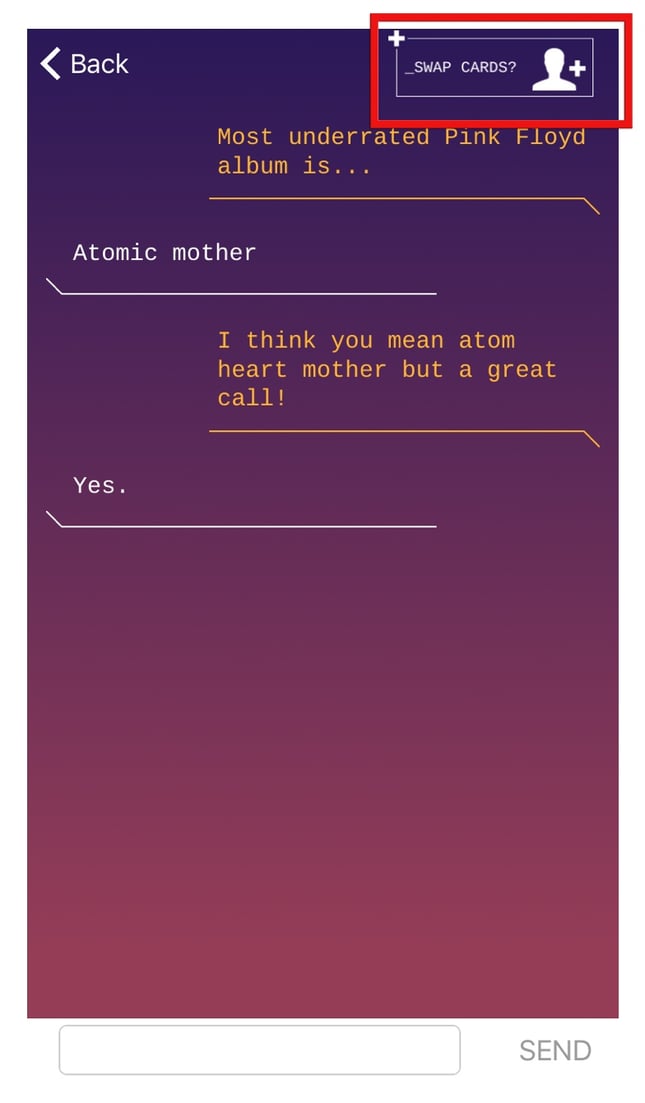 "You have a conversation, both sides find value in the exchange, and you exchange pseduo-business cards. Easy. This is Plane for me in one sentence."

One of the benefits of "traditional networking" is you can get some business cards and contact someone. But if you get a card from someone who you never end up getting to know that well, it's not a condemnation on your character. The same cannot be said for LinkedIn. I haven't managed my LinkedIn connections as well as I could have over the years. This has depleted their value. It's also why it takes so long for people to respond at times. People are wary of the solicitor. LinkedIn as a messaging platform could be more highly regarded. I suspect I'm not alone, which means the value of a LinkedIn connection as a whole has suffered. On Plane, it's great to see how this virtual business card exchange is set up. Whomever you're talking to has to prove their worth or lack-thereof before you decide to "connect".

You have a conversation, both sides find value in the exchange, and you exchange pseudo-business cards. Easy. This is Plane for me in one sentence.

I'm not Nostradaemus, no. But when Highlight came out and I tried it, I thought, "No way." It was too new. I was too uncomfortable. I didn't understand why you'd want to meet just anybody because they were close to you. It was too unnatural to do on web. But Plane is much different. Despite a natural introvertedness, I'm finding a lot of value in it.

My only ask of you, is please don't be like Ben from Palo Alto: 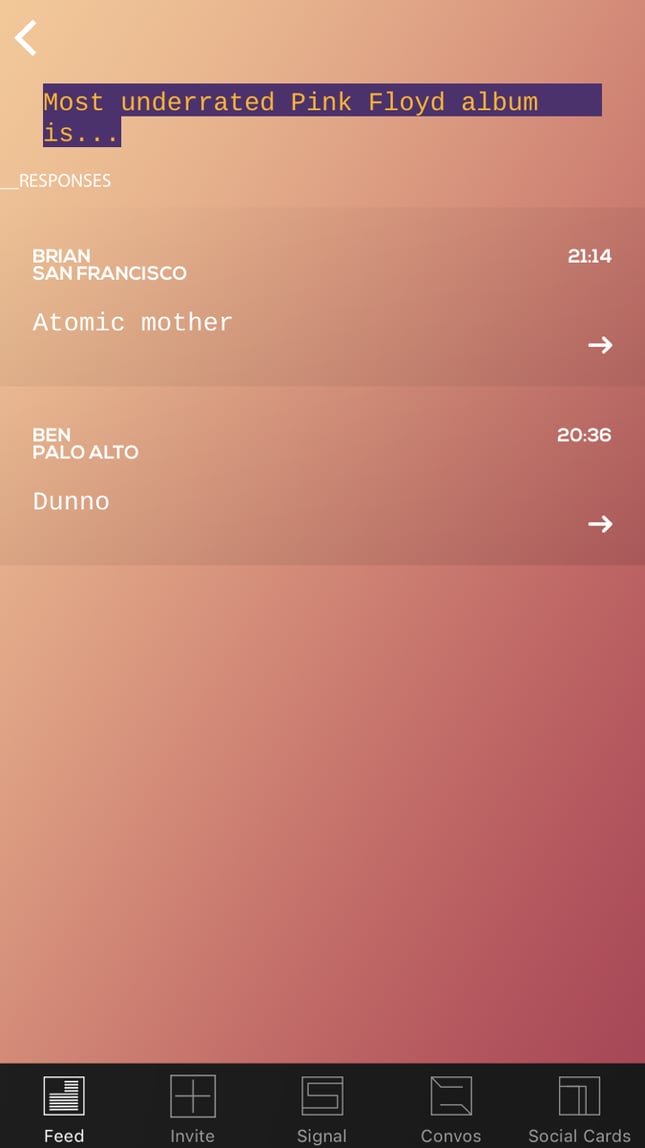 If you're going to respond to a good, honest conversation-starter Plane post, come back with an opinion! 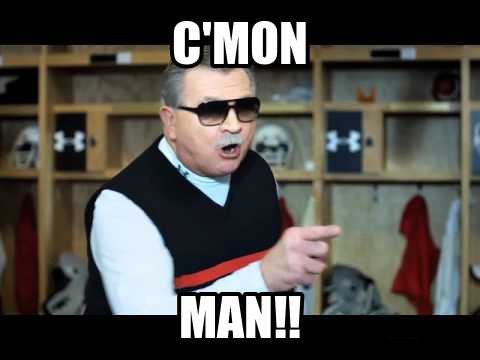 But for the record, the answer is without question, "Obscured by Clouds".